Anti-mosquito apps – do they really work?

After a tiring five-hour flight from Bavaria, I found myself in the duty-free area of a Swedish airport. My ex-wife always wanted to go to Sweden with me on vacation, but somehow, I always managed to persuade her to go somewhere south as a holiday destination. Unfortunately, it is more difficult to persuade my company to send me south rather than north, and as the objective of the business trip was team building, I agreed to go. At least I was spared of carrying along four suitcases, a bunch of toys, and cuddly blankets for kids, and I was able to walk my carry-on trolley pass the long line of the luggage drop-off.

In order to follow the modernity of the north, I saved all of my tickets and other travel documents directly onto my mobile phone. In this way, I contributed to saving the life of trees and had less paperwork to carry with me.

While perusing the duty-free shop, the first thing that struck my eye was a huge variety of mosquito repellents. Usually you find snacks, local delicatessen, and drinks – but anti-mosquito sprays and gadgets? I didn’t expect to find those in such large amounts in the airport. Almost every shop offered some sort of anti-mosquito product in their store windows. I remained true to my motto and carried around as little extra weight as possible. Instead, I decided to download an app that promised to repel mosquitoes by emitting ultrasound through the speakers of my mobile phone during my stay in Sweden.

After arriving at the hotel, I quickly organized my clothes, downloaded an anti-mosquito app, and activated it. I didn’t have much time as I was immediately meeting with my colleagues at the hotel bar to discuss the next few days over a beer (or two). At such prices, one can expect extraordinary beer, but unfortunately, I was disappointed. Bavarian beer is definitely much better than Swedish beer. Around midnight we all turned in for the night, and I already knew I would have a headache in the morning. However, not the typical hangover headache from bad beer but a headache from the countless mosquito bites I had received at the bar! I was sure that I turned on the anti-mosquito app, but I checked anyways to make sure it was on. A brief look into the app confirmed that it had indeed been running all night.

New day, new app, new luck. Even with a second app, I did not manage to survive the next bar evening unharmed, and before breakfast the next day, I found myself in a pharmacy where I bought a cortisone creme. This time I thought perhaps I was to blame, as I had forgotten to take the phone out of my pocket. Was it possible that the supposedly mosquito-repelling ultrasound coming from the speakers of my phone were blocked? I decided to stay in the hotel room that evening in order to allow my skin to recover, but that decision didn’t last long. After the third colleague asked if I wanted to join for dinner, I downloaded app number 3 and activated it in my battle against mosquitoes; this time in a nearby restaurant. 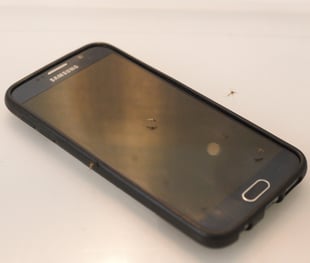 App number 3 was supposedly scientifically tested and rated with 5 out of 5 stars. I thought: This time it can’t go wrong! But even that day I wasn’t so lucky. The peanuts at the bar tasted stale, and the beer worsened with each opened bottle. Nevertheless, the incomprehensible happened shortly after midnight: I wanted to check my phone which was laying on the table for a text, when I spotted a mosquito hovering directly over my phone. Not only that, but it actually landed right on the screen! Of course, the app called “Mosquito Blocker” for which I paid 2.95 € was in operation.

Back home in Bavaria I did some research. Why did I receive so many mosquito bites, even though these anti-mosquito apps are supposedly scientifically tested? I found the answers quite quickly:

If you are not convinced yet, you have to watch the video below from the Biogents Contract R&D Laboratory! It shows what happens when you hold a mobile phone with an anti-mosquito app turned on in a cage full of mosquitoes.

Next time I’ll be better informed before trying modern approaches, and while traveling I will use tried and true measures against those pesky mosquitoes. A good mosquito repellent might not smell great, but it works!