Mosquito surveillance – what is this?

By conducting a mosquito surveillance, you can answer questions such as: Which mosquito species are present? Where are they? At what times during the year do they appear and disappear? This can be archieved by collecting, counting and identifying adult mosquitoes (or their larvae, pupae or eggs). In some areas collected specimen are also screened for the presence of pathogens, such as West-Nile-Virus or Dengue virus. This provides a better overview of regions at risk.

What are tiger mosquitoes and why is it necessary to keep an eye on them?

Asian tiger mosquitoes (Aedes albopictus) are black, relatively small, and have distinct white stripes all over their body (fig. 1). 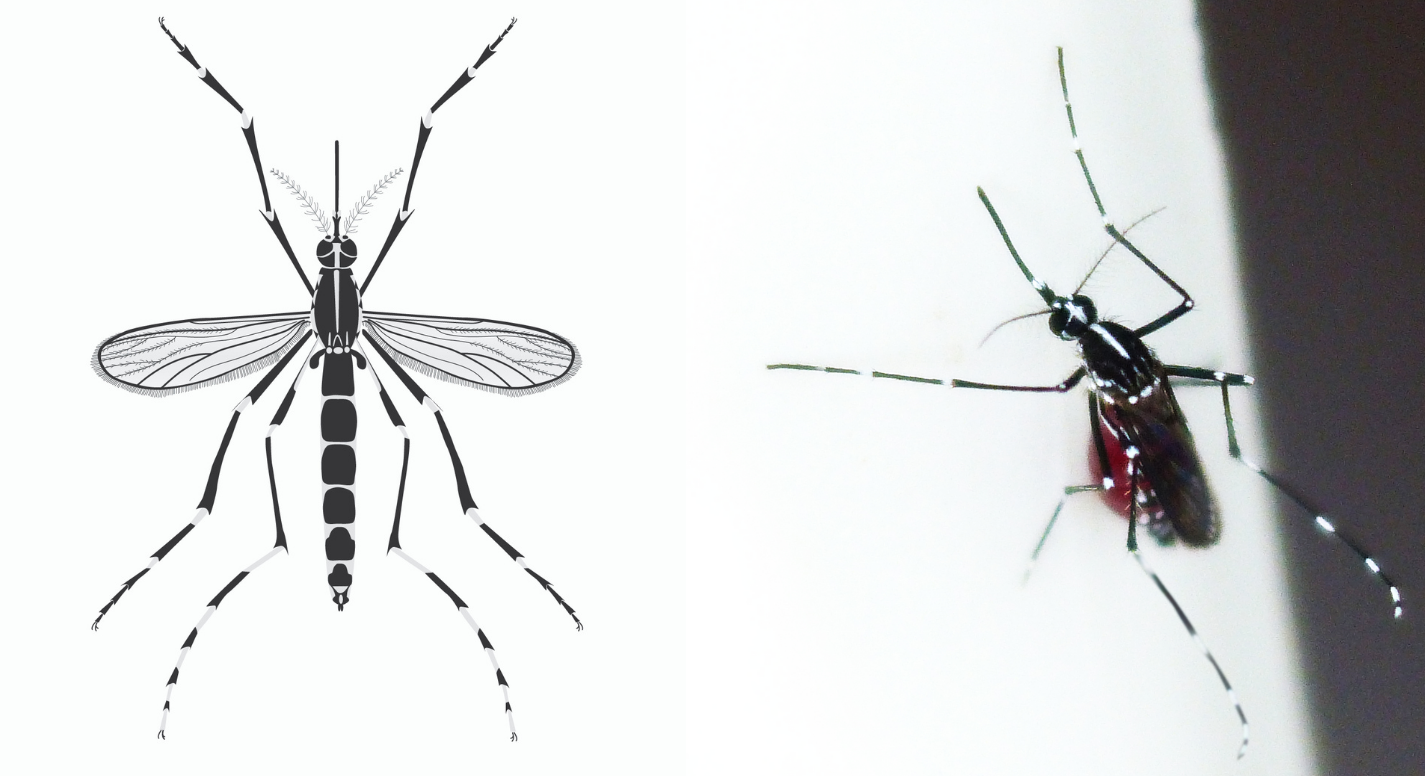 In the last 30 years the Asian tiger mosquito has rapidly spread worldwide and has also arrived in some regions of Germany. The tiger mosquito is an important vector of various diseases, such as chikungunya fever, dengue fever and Zika.

The risk of epidemics of these diseases is relatively small in Germany. However, small local outbreaks would be conceivable if, for example, a traveler were infected with one of the three viruses abroad and then be bitten by a tiger mosquito at home. For the virus to replicate in the mosquito, the outside temperatures must be high enough and the mosquito must live long enough. If this was the case, this mosquito could infect another person during a blood meal.

Apart from the potential danger as a disease vector, the Asian tiger mosquito is an extremely aggressive, day-biting mosquito species that can turn your happy leisure time, that you want to spend in your garden, into hell. In infested areas, it is often the case that, as soon as you enter a garden, you are approached and bitten by many mosquitoes at the same time. That takes away any joy you might have had at coffee parties, barbecues, or sandbox games in your backyard!

How to monitor Asian Tiger mosquitoes?

For mosquito surveillance it is most effective to collect adult mosquitoes. Biogents traps for researchers (BG-Sentinel, BG-Pro and BG-GAT) were developed specifically for Asian tiger mosquito (Aedes albopictus) and yellow fever mosquito (Aedes aegypti) monitoring. These traps are used worldwide by mosquito professionals and there are already hundreds of scientific publications in which Biogents traps have been used.

Surveillance of Asian tiger mosquitoes in Fürth in detail

Asian tiger mosquitoes have been monitored in Fürth since 2020. The first specimens were caught by residents in the fall of 2019 and were sent to the “Mückenatlas”. This is a Citizen Science project in which interested citizens help collect data on mosquito distribution in Germany. Well-preserved mosquitoes are sent to the Leibniz Center for Agricultural Landscape Research, where they are then identified by scientists. The city of Fürth was informed about the discovery of a tiger mosquito in their city and made aware of the problem. Therefore, a tiger mosquito surveillance program could be started very promptly, already in spring 2020. For this purpose, the city has commissioned Biogents AG.

Two types of Biogents traps were used for the tiger mosquito monitoring in Fürth:

BG-Pro: This is an active suction trap (Figure 2A), which attracts mosquitoes with the help of CO2 and an artificial human skin scent. It imitates a human being, so to speak, and therefore attracts mainly mosquitoes that are looking for a blood meal. This trap has very high catch rates and traps tiger mosquitoes as well as all other mosquito species, such as house mosquitoes and floodwater mosquitoes. Thus, many different mosquito species can be monitored at the same time. Its working principle and catching performance is the same as that of BG-Mosquitaire CO2 trap, which is offered to end users.

BG-GAT: GAT stands for Gravid Aedes Trap. This passive trap (Figure 2B) does not require electricity or CO2 and is very specific for Asian tiger mosquitoes (Aedes albopictus) and yellow fever mosquitoes (Aedes aegypti) that are ready to lay eggs (gravid). The trap has all the characteristics of an ideal tiger mosquito breeding site, however, mosquitoes that enter the trap get stuck on a sticky card.

Figure 2: Pictures of the traps that were used for mosquito surveillance in Fürth, 2021.

In 2021, the mosquito traps were set up in the southern part of the city in several allotment gardens and the residential area where tiger mosquitoes had already been caught the previous year. The neighboring areas, in which no occurrence of tiger mosquitoes was known so far, were also monitored, but only with the BG-GAT traps.

What do mosquito surveillance data tell us?

How to control Asian tiger mosquitoes?

Tiger mosquitoes often prefer to lay their eggs in small collections of clean water. This also explains why they feel so comfortable in our gardens and allotments: there they find countless watering cans filled with water, cisterns, rain barrels, but also trivets, sandbox toys and something like that. At times when mosquitoes are not laying eggs or looking for a blood meal, they prefer to stay in shady bushes they also find in our gardens.

Tiger mosquito control in Fürth was carried out by the company APC AG.

Yes, in addition to the monitoring traps, another 560 BG-GAT traps were used as a control measure. This strategy makes sense because each female tiger mosquito lays about 100 eggs and distributes them in numerous breeding sites, many of which are very difficult to find. There are already several Citizen Science or Neighborhood Projects for tiger mosquito control that are using BG-GAT traps, or a combination of BG-GAT and BG-Mosquitaire traps. One example is a study published in a peer-reviewed journal that was conducted in the small town of University Park, USA, which is heavily infested with tiger mosquitoes.

Figure 3: Photo of a sticky card with many trapped Asian tiger mosquitoes of a BG-GAT trap that was used in Fürth.

Results of the Asian tiger mosquito surveillance in Fürth, 2021

Where are tiger mosquitoes distributed in the city of Fürth?

The two maps in Figure 4 show the locations of the 38 BG-GAT and 8 BG-Pro monitoring traps. The darker the circle or triangle, the more tiger mosquitoes were caught at the respective site over the course of the entire 2021 tiger mosquito season. Two allotment garden sites, as well as the adjacent residential area, had the highest catch rates.

Figure 4: Locations A) BG-GAT and B) BG-Pro monitoring traps deployed in Fürth in 2021. The darker the circle or triangle, the more tiger mosquitoes were caught at the respective position during the season.

When did they appear and disappear?

What was different in comparison to 2020?

This year, control measures were carried out more continuously and comprehensively than in 2020, partly because the financial resources required for control measures in 2021 were already approved in spring. In the previous year, the tiger mosquito findings reported by the citizen science project "Mückenatlas" were confirmed by Biogents' monitoring for the first time. Therefore it was initially necessary to analyze the degree of infestation of tiger mosquitoes in the city first before making decisions about control strategies. In addition, potential hidden breeding sites were mapped the previous year so that they could be quickly located and treated in 2021.

But I live in Fürth and had the impression to be eaten alive by mosquitoes!

Many Fürth citizens must have had the impression in 2021 that there was a high number of mosquitoes in the city. How can it be that in the previous year up to ten times more tiger mosquitoes were caught per week, but this year I felt very bothered by mosquitoes?

What’s the planned course of action for 2022?

In the meantime adult tiger mosquitoes have died due to the low outside temperatures in Fürth. Unfortunately, they are not extinct because they overwinter as eggs. Since it is impossible to locate and destroy all of these eggs, there will be tiger mosquitoes in Fürth again in 2022.

The city of Fürth is already planning to conduct tiger mosquito surveillance and control measures in 2022. Because tiger mosquitoes were repeatedly caught at the end of the 2021 season in an area where only surveillance but no control efforts were conducted, the control area will be expanded in 2022. 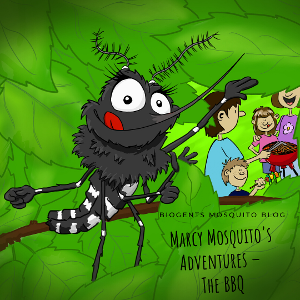