Biogents at the upcoming Pestworld 2018 in Florida

Biogents will present its eco-friendly mosquito traps at the Pestworld in Florida from October 23-26.

END_OF_DOCUMENT_TOKEN_TO_BE_REPLACED

Biogents attends the 84th annual meeting of the AMCA in Kansas City between Feb. 26 – Mar. 2 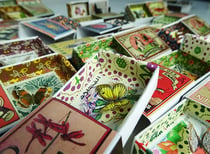 The AMCA Annual Meeting is the premier education and networking event for researchers, educators,vector control professionals, industry representatives, and students in mosquito control. The educational sessions and exhibit hall help to put attendees on the cutting-edge of this ever-expanding field!

At the moment, Biogents is preparing for the 84th annual meeting of the American Mosquito Control Association (AMCA): Biogents scientists have created special crafts! Come check them out at our booth (no. 322). Looking forward to seeing you at the Sheraton Kansas City Hotel at Crown Center, Kansas City, MO, between Feb. 26 – Mar. 2. Of course we will also provide information on our traps and latest innovations…

END_OF_DOCUMENT_TOKEN_TO_BE_REPLACED

Biogents at the Pest Protect in Bremen, Germany

This exhibition addresses professionals of the Pest Control Industry etc. With more than 1.800 visitors from 30 nations the Pest Protect is one of the largest fairs of the European mainland.

We are looking forward to seeing you at booth B210 in hall 4!

END_OF_DOCUMENT_TOKEN_TO_BE_REPLACED

Biogents AG Established a Daughter Company in 2017 in Southeast Asia.

Mid 2017 Biogents AG decided to open a daughter company in Southeast Asia to promote its mosquito traps, and starts bringing the traps to the attention of the Southeast Asian end-consumer market. Biogents SEA is situated in Siem Reap, Cambodia, and is fully licensed and registered with the Cambodian authorities.

Biogents SEA works solely through licensed PCOs (Pest Control Operators) and has already started expanding the network of agents and distributors in the Southeast Asian region at large.
Many contacts were created in a short while with, for the time being, an emphasis on tourism related activities like the hotel- and restaurant sector.
Needless to say that in the Southeast Asian tropical climate one finds a lot of mosquitoes, and so far our traps have seen spectacular catches of up to 60–70.000 mosquitoes over four-day periods.
Sales have started taking off. Not only in the tourism sector but to private households as well.

END_OF_DOCUMENT_TOKEN_TO_BE_REPLACED

Biogents will attend the JITMM 2017 (Joint International Tropical Medicine Meeting) in Bangkok, Thailand, next week from December 6 to 8.
We will present our products at booth A1 and are looking forward to seeing you there!

END_OF_DOCUMENT_TOKEN_TO_BE_REPLACED

Biogents was a proud sponsor of the 8th conference of the EMCA (European Mosquito Control Association) in Bečići, Montenegro, (March 12 – 16, 2017). Central thematic: Mosquito Control in a Changing Environment.

END_OF_DOCUMENT_TOKEN_TO_BE_REPLACED

Biogents at the AMCA meeting in San Diego, California

Biogents attended the 83rd annual meeting of the AMCA (American Mosquito Control Association) in San Diego, California next week (Feb. 13 – 17, 2017), where we presented our products such as the new BG-Bowl, the BG-GAT, the BG-Counter, and the BG-Sentinel 2, as well as our contract research services!

END_OF_DOCUMENT_TOKEN_TO_BE_REPLACED

Intelligent mosquito counters made in Germany: facing competition from Microsoft?

Scientists all over the world can now track the growth of mosquito populations on their computers. “The BG-Counter is a new kind of mosquito counting machine that allows scientists and health authorities to be proactive against a coming infestation,” says Dr. Martin Geier of Biogents AG in Regensburg, Germany. The high-tech equipment was developed by the Regensburg mosquito experts in cooperation with a company from Silicon Valley, and has been successfully tested since autumn 2015 in the Florida Keys on the southern tip of the Florida peninsula. The counter is now going into serial production. Recently, a demonstration model has come online at Lake Starnberg south of Munich. Since mid-June, it has been possible to track the increase in mosquito populations after the recent floods and even the times at which these insects are particularly active.
Last week, Microsoft announced that it was developing a similar mosquito trapping system, indicating that the demand for such intelligent mosquito traps is great and will continue to grow in the future. Globally, mosquitoes are considered among the creatures most dangerous to humans. Hundreds of thousands of people die each year from mosquito-borne diseases. Biogents AG, headquartered in the Bavarian city of Regensburg, has a prominent position in this promising market. For example, Biogents traps are considered the gold standard for yellow fever and Asian tiger mosquitoes around the world. No wonder since they are based on more than twenty years of intensive research and development.
Whether the Microsoft traps will be comparable to those made by Biogents remains to be seen. “Microsoft wants to develop traps into some kind of flying laboratories that are supposed to solve every issue related to mosquito monitoring in one fell swoop. Our experience shows that it’s better to establish effective technologies step-by-step and integrate them over time,” says Dr. Geier. Most importantly: Before mosquitoes can be analyzed and counted, they first must be attracted and trapped. When it comes to this essential detail, Biogents leads the field. Their particularly efficient traps are used by public health authorities and scientists worldwide. Even the US Centers for Disease Control and Prevention (CDC) recommends using Biogents’ BG-Sentinel traps as a monitoring tool in the fight against Asian tiger mosquitoes and yellow fever mosquitoes. Both these mosquitoes can also transmit dengue, the Zika virus, and the chikungunya viruses, and are therefore considered particularly dangerous. According to the CDC, BG-Sentinel traps are currently the mosquito traps most commonly used to catch adult tiger mosquitoes. The field trials of the BG-Counter on the Florida Keys were very successful. 80-90% of the trapped mosquitoes are correctly identified and counted. “Other mosquito-fighting organisations have indicated their interest in these new counters,” says Geier. Since February, Biogents has joined forces with Irideon SL in Spain and the Technological Educational Institute of Crete to further develop the BG-Counter’s sensors. The aim: to distinguish different mosquito species caught in the trap, and to identify those that are especially problematic as potential disease vectors. This project called REMOSIS (Remote Mosquito Situation and Identification System) is being funded by the EU’s Horizon 2020 programme. Researchers around the world will then be able to track carriers of disease and invasive species even more accurately than ever before. END_OF_DOCUMENT_TOKEN_TO_BE_REPLACED

Evaluation of BG-Sentinel trap as a management tool to reduce Aedes albopictus nuisance in an urban enviroment in Cesena, Italy

Since its introduction and establishment in Italy during the early 1990s, the Asian tiger mosquito, Aedes albopictus, has spread over large parts of Italy and other Mediterranean countries. Aedes albopictus is both a nuisance and a competent vector for various arthropod-borne pathogens. Although efficient traps for Ae. albopictus exist and are used for population monitoring, their use as a control tool has not yet been studied. We evaluated Biogents BG-Sentinel mosquito traps, used with the BG-Lure, as control tools in northern Italy. The trial was performed as a controlled experiment in which 3 intervention sites, equipped with 7 or 8 BG-Sentinel traps each, were matched with 3 comparable control sites. Trap density ranged from 1 trap per 150 m2 to 1 per 350 m2. Mosquito populations were monitored at both the intervention and control sites with weekly human landing collections (HLC) and ovitraps. Between 64% and 87% fewer Ae. albopictus individuals were collected by HLC at the intervention sites with the BG-Sentinel mosquito traps, as compared to the untreated control sites. These results indicate that the sustained use and proper placement of efficient mosquito traps can significantly reduce Ae. albopictus biting pressure.

Read more about the results in the publication:
Englbrecht, C., Gordon, S., Venturelli, C., Rose, A., and Geier, M. (2015). Evaluation of BG-Sentinel Trap as a Management Tool to Reduce Aedes albopictus Nuisance in an Urban Environment in Italy. Journal of the American Mosquito Control Association 31, 16–25.

END_OF_DOCUMENT_TOKEN_TO_BE_REPLACED

40 to 50 BGS traps were utilized during an intensive 5-year surveillance as part of an ‘Area-wide Management Program for the Asian Tiger Mosquito’ in NJ, USA. The results are now published. The authors say that the Biogents Sentinel (BGS) trap is a very effective tool to monitor adult populations of Aedes albopictus and that although BGS traps are becoming the gold standard instrument for Ae. albopictus surveillance, they can also be used to collect other important mosquito species, which can enhance existing vector surveillance programs.

Read more about the results in the publication:
Unlu I., Farajollahi A. (2014) Multiyear Surveillance for Aedes albopictus with Biogents Sentinel Trap Counts for Males and Species Composition of Other Mosquito Species. Journal of the American Mosquito Control Association, 30(2):122-125.
DOI: http://dx.doi.org/10.2987/14-6401.1